Kumawood actress, Clara  Amoateng Benson, widely known as Maame Serwaa has cried out over people comparing her to Yaa Jackson.

In an interview with Asempa FM, monitored by Pataapa.com, the actress called on Ghanaians who are comparing them to seize fire.

According to her, she has been seeing some photos of her and her friend, Yaa Jackson, now a musician flying on social media as they compare them togehter.

Speaking in the interview, Maame Serwaa indicated that such comparison are unnecessary because it breeds envy and jealousy at the end of the end.

She further stated that she has a very good relationship with the “Ehwe Pa” singer and they have been besties since childhood.

So she she will not allow the comparison to ruin in their long term friendship.

“I talk to Yaa very often and those comparisons cannot destroy our relationship,” she said. 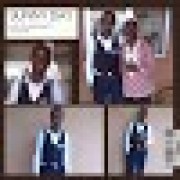 Meet The Slayqueen Who Permitted Counsellor Lutterodt To F!nger Her Cl!t On Live TV [HOT PHOTOS]